The premiere of the Rite of spring in 1913 is a mater of infamy and speculation. Some basic facts illuminate the atmosphere to an extent. This was only the second ballet to show at the newly constructed Théâtre des Champs-Élysées since it had only been open for two months.

Igor Stravinsky originally composed Le Sacre to be a ballet. The work was in fact a commission from the great ballet impresario Serge Diaghilev who worked closely with famed dancer and choreographer Vaslav Nijinsky. The final player in the production is really quite interesting. An artist, set designer, costume designer, Poet, amature archiologist, scholar, and preservationist named Nicholas Roerich. 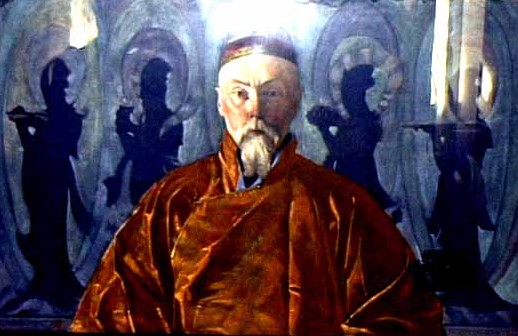 The Choreography was entirely left to a talented dancer but inexperienced choreographer Vaslav Nijinsky, who's work on the Rite has it detractors.

No doubt Nijinsky had his work cut out for him as described in this article.

"The Ballets Russes dancers of 1913 detested working on Sacre. They had trouble counting the music. They didn't like taking orders from a 24-year-old colleague many of them had been in school with. Plus the temperamental Vaslav Fomich Nijinsky was asking them to turn in when they'd spent years turning out and to hunch over and pound their steps into the floor. In the Chosen Virgin's solo, Lydia Sokolova had to manage close to a hundred jumps--almost literally dancing herself to death." (Jowitt, Deborah )


It is also important to remember the setting of Stravinsky's Paris in 1913. It is fair to say that the Parisian elite had a fascination with the pagan history of mankind. The exotic Russian show would have appealed to a not altogether high minded fascination with the strange, explicit, sexual, and grotesque. John Merrick "the elephant man" had been on display in London a few decades before.

Stravinsky recalls the premiere of Le sacre on May 29th 1913 at the Théâtre des Champs-Élysées in Paris.

“I was sitting in the fourth or fifth row on the right and the image of Monteux's back is more vivid in my mind today than the picture of the stage. He stood there apparently impervious and as nerveless as a crocodile. It is still almost incredible to me that he actually brought the orchestra through to the end. I left my seat when the heavy noises began light noise had started from the very beginning and went back stage behind Nijinsky in the right wing. Nijinsky stood on a chair, just out of view of the audience, Conversations with Igor Stravinsky shouting numbers to the dancers. I wondered what on earth these numbers had to do with the music, for there are no "thirteens" and "seventeens" in the metri cal scheme of the score.”
“From what I heard of the musical performance it was not bad. Sixteen full rehearsals had given the orchestra at least some security. After the "performance" we were excited, angry, disgusted, and . . . happy. I went with Diaghilev and Nijinsky to a res taurant. So far from weeping and reciting Pushkin in the Bois de Boulogne as the legend is, Diaghilev's only comment was "Exactly what I wanted." He certainly looked contented. No one could have been quicker to understand the publicity value, and he immediately understood the good thing that had happened in that respect. Quite probably he had already thought about the possibility of such a scandal when I first played him the score, months before, in the east corner ground room of the Grand Hotel in Venice.” (Stravinsky,Craft p.46-47)


Watch a scene from the Film "Riot at the Rite"


The film suggests that theater goers of the 1910's were prone to uncouth displays of objection. A look at history reveals that this type of incident was in fact common. Lynn Garafola Compares the reaction to Stravinsky's work to the reception of Wagner's Tannhauser in 1861 in her book Diaghilev's Ballets Russes. However, she illuminates further that the premiere of Le Sacre was particularly raucus.

"One smart lady slapped a hissing neighbor; another called Ravel "a dirty Jew"; whistles hissed; a composer yelled for the "sluts" of the sixteenth arrondisment - where many of Diaghilev's boxholders lived- to "shut-up". (Garafola p.64)

the artist Valentine Gross Hugo wrote about the premiere of Le Sacre.

''It was as if the theater had been struck by an earthquake,'' ''It seemed to stagger in the uproar. Screams, insults, hoots, prolonged whistles drowned out the music, and then slaps and even boos.''(Garafola p.64)

She goes on to say that the music was almost inaudible, and a ''very pale'' Nijinsky shouted the beat to the dancers from the wings, while Serge Diaghilev gave orders over the noise from his box.(Garafola p.64)

Jean Cocteau, a poet and artist said the noise was like a battle.

''Standing in her box, her tiara askew, the old Countess of Pourtales brandished her fan and shouted, turning bright red, 'It's the first time in 60 years that someone dares mock me,' '' he wrote. ''The worthy lady was serious. She thought it was a hoax.''(Garafola p.64)

Marcel Proust, who was also in attendance later wrote to Gabriel Astruc who had opened the theater a few months before :

''The difficulties you have faced will surely give the work a place in the history of art, more so than had it met with immediate success,'' (Garafola p.64)

"Le Sacre Du Printemps" was only performed five times that year three in Paris and two in London. It would not be performed again until 1920.


View a recreation of the rite of Spring in Choreography and set design.